A downloadable game for Windows, Linux, and Android

Polychoron is a simple but challenging 3D arcade shoot'em up in an endless series of unique mazes. The objective is to navigate through the mazes, destroy hostile drones, collect score, and survive as long as possible. Those who reach the highest levels and collect most score before their inevitable death get their names on the global high score table.

Wish this game was updated but its still good.

Full freedom of motion in zero gravity really does a lot to mix up the formula of first-person shooters and I absolutely love it. This feels a lot like what moving around in zero gravity would actually be like, with all of the challenges that comes with.

This is definitely a game that benefits from controller support, I think. I don’t have a working controller, sadly, and it took me a while to get used to navigating environments like this. It’s a good thing the game’s difficulty curve gives you time to grow accustomed.

No complaints about the gameplay. I like how powerups are cumulative and wear with use rather than on a time limit. The minimal sound design means that audio cues help out a lot when trying to scan the environment. The full range of movement allows for some pretty clever maneuvering when you find an enemy behind an impenetrable force field and rather than bring down the force field you can finagle your way around to attack them from behind.

The one thing I thought could use some more work was the environment design, because after a while the maps started to feel kind of samey. There were rarely land marks I could use to see if I had scanned an area before, so when there’s one enemy left and it’s not bleeping to let me know it has line of sight I occasionally find myself floating around not knowing whether or not I’m going in circles trying to find it. Having said that, this difficulty didn’t stop me from playing more of the game, so at worst this is a minor criticism.

This game really opened my eyes to the possibilities of 6 degrees of freedom, because while this game is fairly simple I found endless potential in the concept. It’s broadened my scope quite a bit. Well-done to the developer.

This is a fun little 6DoF!  I was quickly able to dial in my mouse controls and drop a 10K first game.  I'm going to spread this around a bit, see if I can't get this some more pilots!

It would be great if this game supports 2 joysticks. I play 6DOF shooter with throttle and flight joystick, because throttle's stick is intutive for strafing.

Sometimes an opened area (like 3x3 or larger empty space) with swarm of enemies would make the game more dynamic.

I will see if I can add support for multiple joysticks. I've never tried a  HOTAS setup myself but I imagine it would be a great way to play this game.

Thanks. How about adding secondary missile weapons like descent series ? That would add some more depth to the gameplay, with several different missile types.

I have though about secondary weapon power-ups. The laser beam was supposed to be the first one but I added it as a primary weapon replacement so that I didn't have to add another touchscreen button in the mobile version. The logical secondary fire button (L1) on gamepad is also used already,

I would like to add some missile weapons but it would need changes in the controls. It might happen, but I'm not making any promises  :)

Okay. if you don't add secondary weapon, an upgrade or shop system after the levels would be good for deeper gameplay.

Here's some feedback after playing further:

1. you have to introduce new enemies faster. level 1~3 contains only 1 kinds of enemy which is quite boring. If I were you, I'd add new enemies after every waves and start to increase the difficulty once all enemies are introduced.

2. Exploding enemies are quite boring to fight. I have to shoot it once and wait until it explodes. Instead of sitting duck a creeper-type enemy that chases me and then self-destruct would be more interesting. of course killing it shouldn't cause damaging exlosions.

3. I can barely find the heath in the levels, it's very frustrating in later levels. you should give a small amount of guaranted health bonus in all levels.

4. Enemies should be smarter as the game progress, like anticipating the player's location based on its movement speed and distance when firing bullets, and actively avoiding the player's bullets. 6DOF games need smart enemies to fully utilize 6DOF controls.

5. wouldn't it make more sence if turrets are mounted on walls instead of floating and not moving at all ?

Thank you for playing and for the feedback!

1. I might adjust this when/if I add more enemy types. Currently new enemies are introduced on levels 4, 8 and 12. If I introduce them much earlier, the later levels would get boring as there would be nothing new to expect.

2. If you mean the round "mines", you're absolutely right. They have already been redesigned for the next version. They now trigger when they see the player for long enough time and explode sending fragments towards the player. They are still stationary but now they actually pose a threat.

3. There is a shield power-up that lowers the damage taken on hit but there is no way to recover your health. This is a design choice. The game is designed to be an endless high score shooter where the player eventually dies and avoiding damage is the most important thing.

4. That's a good point. I could make the enemies aim a little smarter at higher levels. Currently they only get tougher and shoot more/faster.

5. They are drones in zero gravity, guarding their designated positions. I don't see why floating makes any less sense :)

The reason why most enemies don't move and none of them actively follows the player is that I want the player to always be able to retreat to safety and relax for a while. I also wanted to enable more careful play style where you can sneak behind corners and trust that enemies don't sneak behind your back. This is also why there are no time limits or time score bonuses.

Now that I took a closer look at my code, I noticed that using multiple joysticks  should already work! You can bind inputs from multiple joysticks in settings. The UI just doesn't show which device each button belongs to but it still works.

Please try this in alpha 0.0.9 and report back if there's something (other than the UI) that needs fixing.

I think levels could use some variety. Different kinds of enemies and weapons wouldn’t hurt as well. Just something to look forward to, I already like it as it is!

It’s cool that it has Linux support, I wish more developers were doing it. Controller support is also appreciated! You probably want to add controller to the input methods, so more people could find your game.

By the way, I got to the first place on the leaderboard! Probably not for long though. :-)

Thank you for the feedback!

As for the variation, I'm planning to add secondary weapon power-ups and I might add some new enemy types too. I initially planned to generate varying sizes of levels but then settled for the current relatively small size to keep the average level completion time short.

How far did you get? If you got to level 8, then you probably saw all the enemies there are.

The game is being developed on Linux too ;)

Thanks for pointing out the missing input methods. I had forgotten to fill any of the metadata for the game.

I’m not sure, level 6 maybe? I’ve encountered the exploding sphere things, are there any enemies beyond that? I might replay and see if there’s more.

I think different wall textures and some decoration objects would already add a lot of variation to the levels. And maybe some windows to make levels feel a bit less isolated. The game takes place in space, right?

I’ve noticed an earlier version of this game that was created for the Linux Game Jam 2019. It’s so awesome! I develop all my games on Linux too. I’m hoping to participate in the next LGJ. :-)

There's one more enemy type coming after that. It has the same model for now,  but very different behavior ;)

One item  on my task list is to experiment with decals to add variation to walls. At one point, I tried differently colored wall "themes" used for certain parts of  the level to add variation and help with navigation, but I never got it to look good enough, so I removed it.

The isolated and claustrophobic feel is sort of intentional. I haven't really made up my mind about where the maze is located but space is one option. Now that  there are no windows, I don't have to choose :) 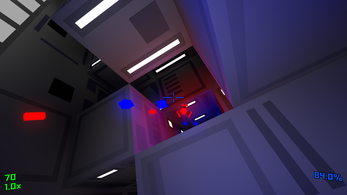 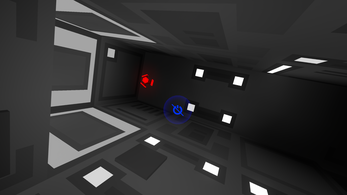 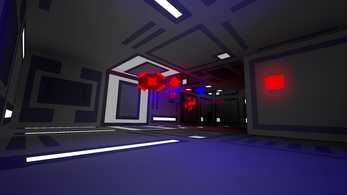 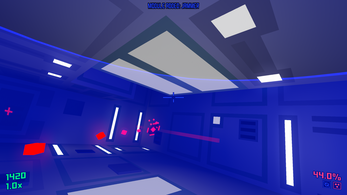